Fifty years ago, on June 28, LGBTQI+ patrons and allies at New York City’s Stonewall Inn stood up for justice demanding an equal life free of persecution. This year, as more than 4,000 Microsoft employees march in Pride parades in more than 60 cities and 30 countries around the world, we invite you to join us in pushing inclusion forward.

To commemorate the 50th anniversary of the Stonewall uprising, we’re taking action for equity by donating to LGBTQI+ nonprofits. Plus, we’re releasing limited-edition products designed with and by the LGBTQI+ community.

Microsoft has a history of LGBTQI+ inclusion

For us, Pride is an opportunity to reflect on our past and galvanize for action. We started our inclusion journey early in the company’s history, introducing sexual orientation in our non-discrimination policies in 1989. In 1993, we were one of the first companies in the world to offer employee benefits to same-sex domestic partners. In 2004, we added Gender Identity to our Equal Employment Opportunity statement and started providing Gender Affirming healthcare services. since 2005, Microsoft has attained a top  score of 100 on the Human Rights Campaign Corporate Equality Index, which indicates that Microsoft is establishing and applying policies to protect the LGBTQI+ community.

Our journey is just beginning

Today, Microsoft operates in over 120 countries, most of which still don’t provide legal protections for LGBTQI+ individuals. This year, Microsoft’s Pride campaign is all about the actions that our employees and customers are taking to advance inclusion. GLEAM (Global LGBTQI+ Employees and Allies at Microsoft), our LGBTQI+ resource group, worked with many of our teams to develop products to create visibility into the LGBTQI+ community.

In designing this year’s Pride campaign, LGBTQI+ designers and allies at Microsoft reflected on the LGBTQI+ rights movement of the 1970s. Dozens of LGBTQI+ community members and their allies submitted designs for campaign buttons displaying everything from personal statements to political slogans. These buttons reflect actions that people at Microsoft are taking and are encouraging others to take.

Microsoft is releasing all the button designs as a downloadable archive so everyone can use them, add to them and share their Pride with everyone, wherever they are.

For the first time, we’ve also created limited-edition products and curated content to show our continued support for the LGBTQI+ community. 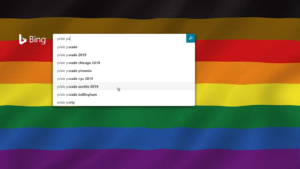 We’re donating $100,000 to the following nonprofits in Australia, Canada, United Kingdom, and the United States to celebrate and support their work on LGBTQI+ equality:

We’re also happy to announce that LGBTQI+ nonprofit, Destination Tomorrow, was awarded a grant from the Microsoft Store to support their inclusion efforts for people of color. See what happened when we took action to help them thrive.

We invite everyone to join us in taking action for equality. Microsoft Pride 2019 products launch today! Follow along with our stories all month and learn more about actions you can take for equality by joining the social conversation using #MicrosoftPride.